Royal Djurgården, the largest green area of central Stockholm, has been royal property since 1452, 40 years before Columbus discovered America. The land, previously a royal farm and royal hunting park, developed in the 19th and 20th centuries into a royal pleasure park and the city’s main recreation area. Today, the park includes a total of 1000 hectares and it is the largest tourist destination in northern Europe with about 15 million visitors annually. Since 1995, Djurgården is a protected area as it is part of the world’s first National City Park. In addition to untouched nature and a landscaped park, the area includes everything from restaurants and cafés, to an amusement park and museums, hundreds of cultural monuments, and a royal palace – Rosendal.

Rosendal is located in the middle of South Djurgården, a beautiful island that makes a third of Royal Djurgården. In this scenic landscape, a country estate was built as early as the 18th century. The new crown prince and future king, Karl XIV Johan, fell in love with this place and acquired the property as early as 1817. The following year, as the new king and the first of the Bernadotte dynasty, he built his own gazebo here and around it a pleasure park, developed by his successor in the coming century. The park was refined and enlarged and within its precincts, land was given to the Swedish Horticultural Society, with large cultivations and greenhouses, as well as the country’s first horticultural training. 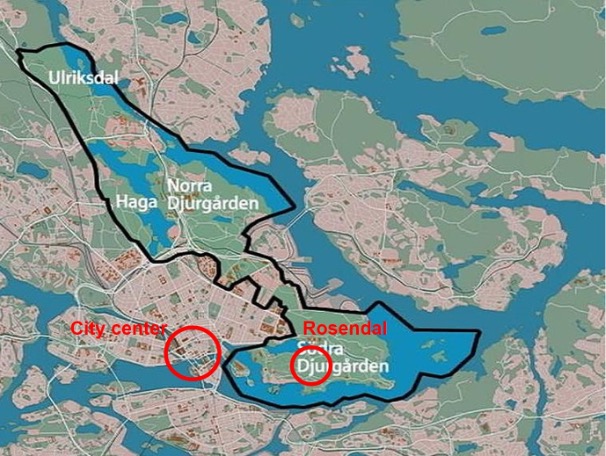 Djurgården and the Royal National City Park is the green heart of Stockholm, a city of one million inhabitants.

The citizens were welcomed

From the very beginning the new king was dedicated to open up his novel property to the public. Fences were torn down, walkways were built and park benches were positioned out. The castle and the pleasure park became a place where the new dynasty established a connection with the citizens. Rosendal, in the middle of Djurgården, became a remarkable facility and gradually strengthened its position as the city’s main excursion destination. The small castle was the first Swedish interpretation of the austere classicism of the early 19th century – the so-called Karl Johan-style. The park, with its soft adaptation to the landscape and its ambition to include a slightly chastened nature, became characteristic of its time. The landscaped part was almost imperceptible in the nature.

Art became a distinguishable part of the place. Not only through the typical architecture, interpreted by one of the prominent architects of the period, but also through the numerous elements of public art in the park. Sculptural art is represented by works in a neoclassical style in a smaller format, with the exception of the King’s porphyry work, a colossal and iconic porphyry vase. It became a symbol of Rosendal, which attracted many visitors to the site. The park’s thoughtfully planned views and sight lines were often reinforced by a work of art catching the eye.

Around 1830 another large project was initiated at Rosendal. Karl XIV Johan wanted to build a magnificent art museum on the site. Drawings were produced, preparations were carried out and marble columns were delivered. Only after the decision on a new National Gallery the plans were abandoned. Some of the columns today adorn the entrance to the park at Djurgården Bridge.

The unique qualities of the facility and the aesthetic ambitions expressed by the young dynasty, transformed the Rosendal Palace from a royal gazebo into a Royal Museum of Karl XIV Johan, and the style named after him, as early as 1913. The palace and the closest part of the park became a listed building in 1935.

As the popularity of the Royal Djurgården grew, so did the park’s greenery. The beautiful facility in the middle of South Djurgården fell over time into a Sleeping Beauty. The previous view and walkways disappeared. Flowerbeds decreased and the untamed forest pressed on. The original visualization vanished among the leaves.

Karl XIV Johan on the raft bridge at Rosendal. In front of the castle, glimpses the mighty porphyry vase.

Prior to the 200th anniversary of the Bernadotte family in 2018, thoughts of a rebirth – Rosendal Redeviva – were awakened. Wouldn’t it be possible to reestablish the original garden and at the same time reshape it to suite the flow of visitors of our time? An extensive detective work for the task began. With traditional archival studies and hands-on garden archaeology, combined with modern methods such as laser scanning and ground radar, the “raiders of the lost park” was directed. Gradually the image of the early 19th century park emerged. During the same period, the Bernadotte walking path was inaugurated and a new bridge was built in the place where Karl XIV Johan once had a raft bridge. The area was now linked to the surrounding area and new patterns of movement were established. Simultaneously the work to recreate the original park began, with focus on its natural and cultural values.

Another important part of the work to invigorate Rosendal was the royal art initiative. Starting in the summer of 2016, the area was filled with public art in large format. The idea was to let artworks by internationally renowned artists, to interact with the unique qualities of the palace park. The success was instantaneous and several followed the first exhibition. Encouraged by the appreciation of visitors and assessors, the Crown Princess couple raised the idea of a permanent sculpture exhibition in the palace park. In 2019, Princess Estelle Cultural Foundation was founded which, in addition to arranging another appreciated summer exhibition in 2020, acquired a permanent work for the park. Another royal piece of the puzzle was added to the large puzzle Rosendal. 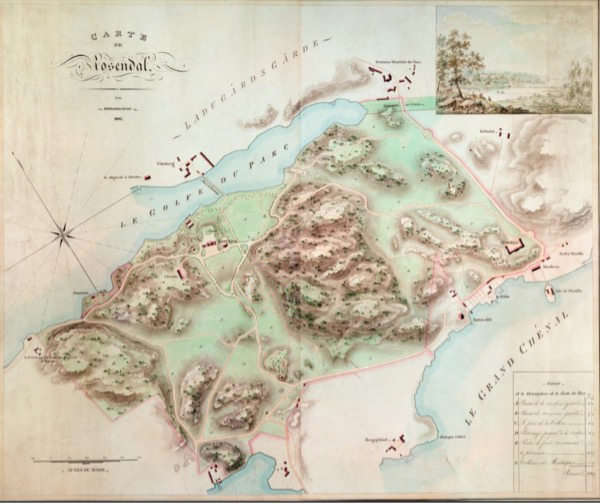 The map by L W Brandenburg from 1826, display Karl XIV Johan’s estate Rosendal and is an important part of today’s restoration.

By the summer of 2021, another permanent sculpture is to be placed in the area, west of the palace. Specifically for that part of the park, the restoration has begun and the original qualities have been made visible again, allowing further contact with the water and long lines of sight in several directions. 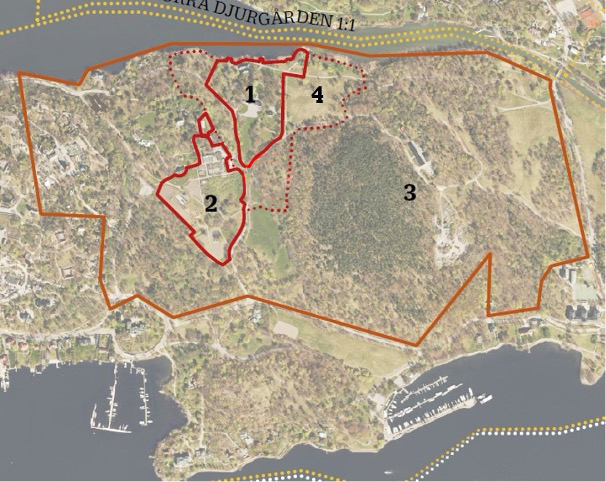